Not that I havent seen mother nature’s splendour before. But I guess I cant blame myself. I went to the Himalayas on my honeymoon, and there were other obvious distractions!!

I think I got my first real taste of mother nature When I drove north into N4 from R512, driving towards pilanesberg (Or sun city, depending on what your intersts might be -21st century entertainment, casinos, waterparks or dear old mother nature and some fantastic african wildlife). Vast expanse of flat grasslands reaching the horizon on either sides of the road, interrupted now and then by the bushy thorny trees in between, some acacias, others I would just call thorny trees for now, for lack of a better name. 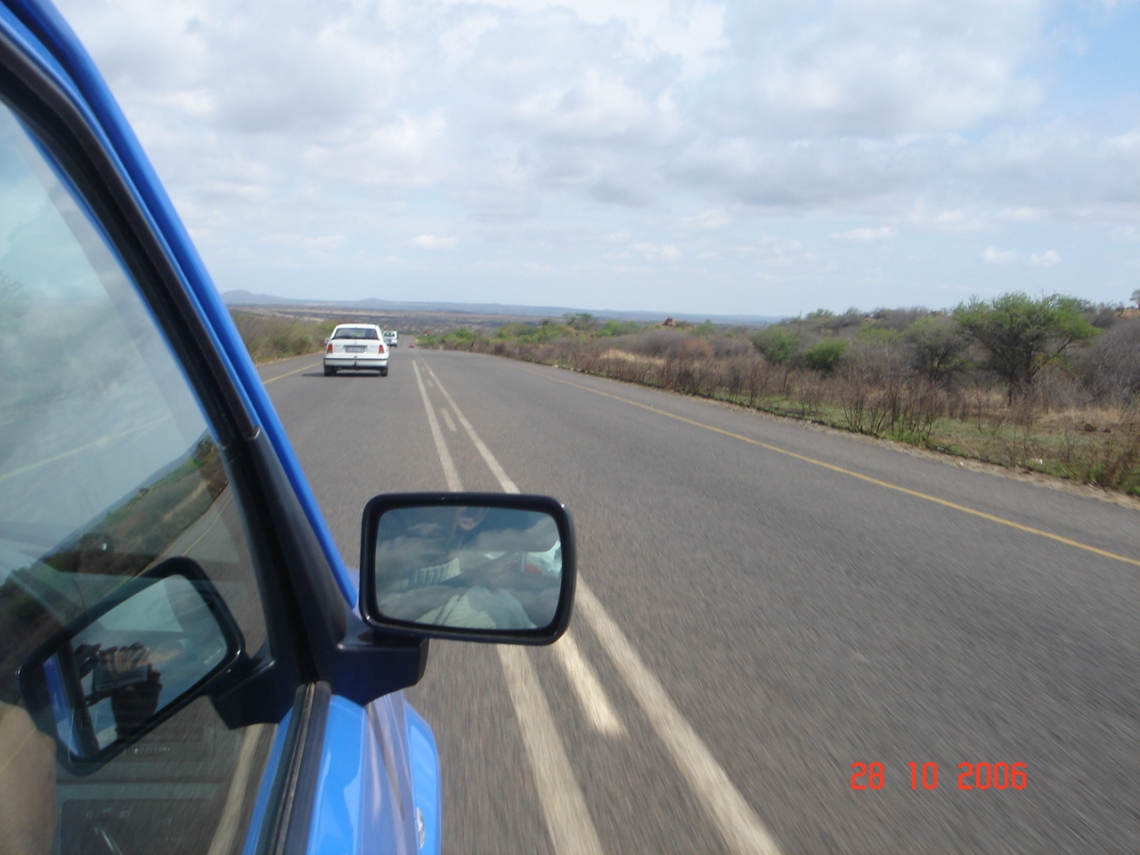 No human habitation for miles, as far as one could see. The sheer fact that it was the way mother nature was intended to be, it was just the way it was thousands of years ago, filled me with a sense of awe. There it was, right before my eyes, behind me, to my left, right and overhead. Planet earth.Mother Nature. The shopping malls, parking lots, offices, traffic signals, tar roads, airports, trains, and numerous other man made wonders suddenly felt extremely trivial and far far away.

Seeing nature that way, does strange things to you. Its as if suddenly someone shows you a much grander scheme of things, in which you have only a minute role to play. Like showing a picture of the solar system to one small little red ant that spends its entire life in a small little ant hill, in one small little corner of your small little backyard.

That humbles you. And it makes you realize, how big all of this is, and how beautiful.

Once inside pilanesberg, at the hide at mankwe dam, I saw the zebras, the wildebeests, the springboks, the impalas and so many others species drinking from the same water hole. A flurry of activity. It was like nature’s very own downtown manhattan. Wildebeests chasing each other, some seemingly elder zebras keeping watch while the younger ones grazed, hippos opening their mouths wide, while the springboks moved their heads from side to side. A red hartebeest grazed alone and a couple of white rhinos appeared far off in the bushes,  A village weaver flew right in from of my binoculars as I watched, and some african langurs jumped about. A few turtles swam near the  shore undecided whether to get on to land, while the fish eagle watched from its vantage point on the dried branches of a dead acacia.

This was another world. It felt like another planet. I was the alien, with the wenger watch, adidas shoes, a sony cybershot and a volkswagen parked outside. Its ironic, isn’t it?! We have such little understanding of our home and ourselves.

On a subsequent trip to the Kruger National Park, by the second day, I started developing primal instincts. I could see a terrain and expect a predator, and I could tell by looking into the wildebeest’s eyes if my presence was welcome or not. And I almost surprised myself when I spotted a lone mountain reedbuck from a good 100 meters, amongst bushy and rocky peaks. I felt a sense of belonging.

More than the belongingness, it felt real. Tough to articulate, but yes, it felt as close to seeing a purpose, understanding a sense behind being or finding a reason for life as it as ever been.

If this was the giant scheme of things, what are we doing in our concrete jungles, in our air conditioned offices,  drinking our low fat milk and nutrition supplements, working out on our tread mills to keep fit and worrying about shopping stress! Its as if we came into this world, saw its beauty, and then left. Left it all behind to create a new world with technology, machines, complex emotions, psychosomatic disorders, concrete, cement, steel and lots and lots of garbage. That does not seem to be a part of the giant scheme of things, does it?!

Some say Africa is haunting. Well it certainly is. It reminds you of what the world was once, and what we did with it. It makes you wonder in awe and it makes you cry.

On my way back from Kruger National Park, on a dark November night, while I drove through Hazyview towards N12, I felt a strong urge to stop, turn around and stay. When I was inside the park, I had felt alive, and I had felt peace. It takes a lot of civilized-humanness (again for lack of a better word) to ignore that kind of a feeling and drive on. But I did. I went on driving till I reached civilization, filled my gas tank, had a coffee and paid through my credit card.

Africa must be the most beautiful place on earth. At least as far as the fenced national parks go. Its as if we have caged nature, put a fence around it, and stayed outside, going in only sometimes to visit.  Our nature, is an animal in a zoo.

Look, thats how planet earth was supposed to be. But we dont like it that way. So we changed it. But we kept a small little part in here, so you could know the story. And yeah, we have a small fee to charge. You could pay through your credit card on your way out.

Pretty soon we wd have made a fossil out of nature.

One of my favourite dreams is someone going in and uprooting the electrified fences of Kruger National Park, taking those steel posts one by one and  unleashing the avalanche of life and nature thats inside. Life, enough to reseed the entire earth again. I see the springboks and the impalas jump out, the zebras and the wildebeests following suit. The fish eagle flying a limitless distance, and mankwe dam in the middle of manhattan. The thorny bushes and the african savanna spreading like an epidemic through the globe, until it looks green again.

And I see a baobab in my backyard. and the clear blue sky on my ceiling.

Africa must be the only continent worth living in.

Banyan Tree Demons and How I grew up